Pyramid poker is one of the hidden gems of the poker world. Lots of people won’t have heard of it and will be asking, what is pyramid poker? The easiest way to explain it, is that it’s a type of Pai Gow poker. Still confused? Pai Gow poker is sometimes called double hand poker, so there’s an extra bonus potential in each hand. Pai Gow poker originated as a very popular Chinese dominoes game. In 1985, Sam Torosian in the US, translated the dominoes game to poker hands and Pai Gow poker was born. 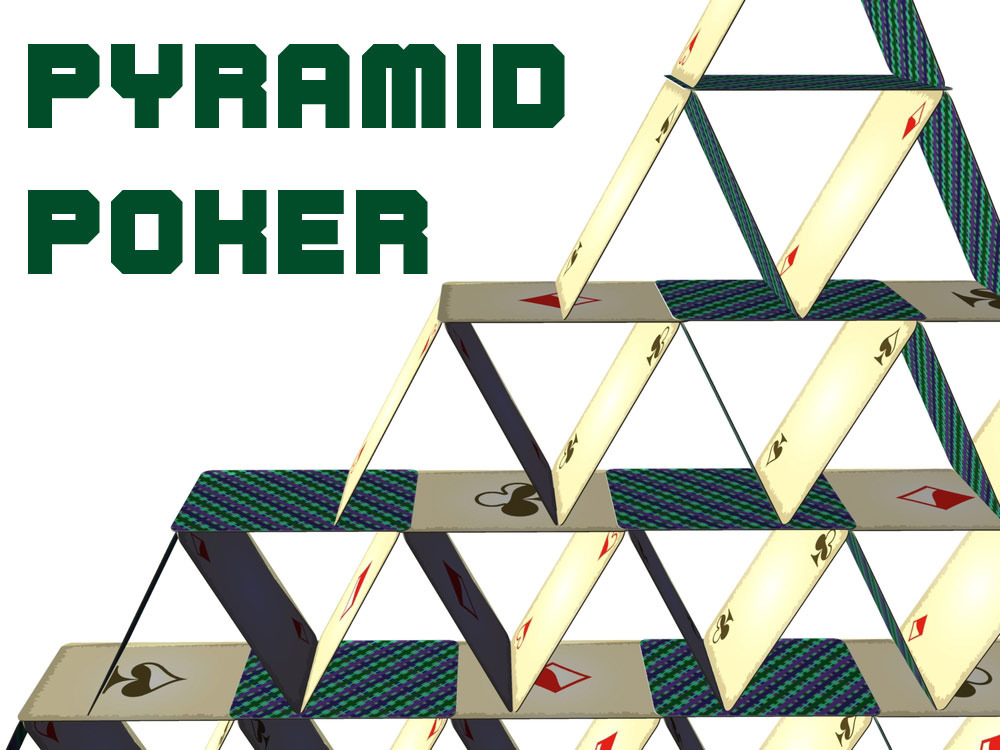 In the world of online poker, it doesn’t take long for poker games to morph into popular new versions – witness Pyramid poker. Whereas traditional Pai Gow poker uses seven cards, this one uses fewer – four hole cards plus three out of six communal cards. And while its hand rankings match those in poker, Aces are always high. Furthermore, while Pai Gow uses jokers, Pyramid poker doesn’t.

The pyramid in Pyramid poker refers to the way the cards are placed when they’re dealt. The dealer is chosen at random for the first round and after that the dealership rotates leftwards round the table.

To begin the game, the dealer gives out three cards face down to each player. These are the hole cards. The dealer also deals themselves a hand. The three cards are used to build two separate hands.

One hand consists of two cards, the other of one card. The one card hand must be lower in value compared to the two card hand. You are playing against the dealer, to see who has the highest ranked hand. Note that flushes or runs aren’t used in the two card hand, so you’re basically looking at pairs as your highest hand.

You now play off your hands against the dealer. But the dealer is bound by a number of rules that dictate how they must play their hand (you can look these up in detail on various specialist pyramid poker sites). You have to win both the high and low hands to win the bet – if you tie with the dealer, the dealer wins.

In the next part of the game, you have another chance to win. The dealer deals four cards face down to each player. Everyone bets and the dealer then places six communal cards in the middle, face down, in the shape of a 3-2-1 pyramid. The two cards in the middle row are turned face up, as is the bottom row middle card. Another round of betting follows.

Once all the communal cards are showing, the players are able to use one card from each row in the pyramid, to make up their hand.

Finally, all players declare their hands, turning up their hole cards and using them in combination with one card from every row in the pyramid, to make up a hand. As they have four hole cards and three possible pyramid cards, they can construct their five card poker hand out of seven cards in total.

The key here is to calculate what other players might have in their hands. Your cards and the pyramid cards give you a strong basis for these calculations. To take a simple example, if you have two Aces and there are two Aces showing on the pyramid, no one is going to be making a hand with four Aces, three of a kind, or a full house involving Aces. Obviously, as you play more, you’ll be able to make more sophisticated calculations, and exploit the huge bonus potential of the game.

Pyramid poker is a fascinating variant which should be better known. It’s well worth investigating if you’re a poker player who likes to vary their game. You may already know Pai Gow, or you may want to try that first, to familiarise yourself with the underlying concepts. Pyramid poker itself has a lot of variants, in fact no two instances of the game seem to be exactly alike – but that’s part of the fascination!